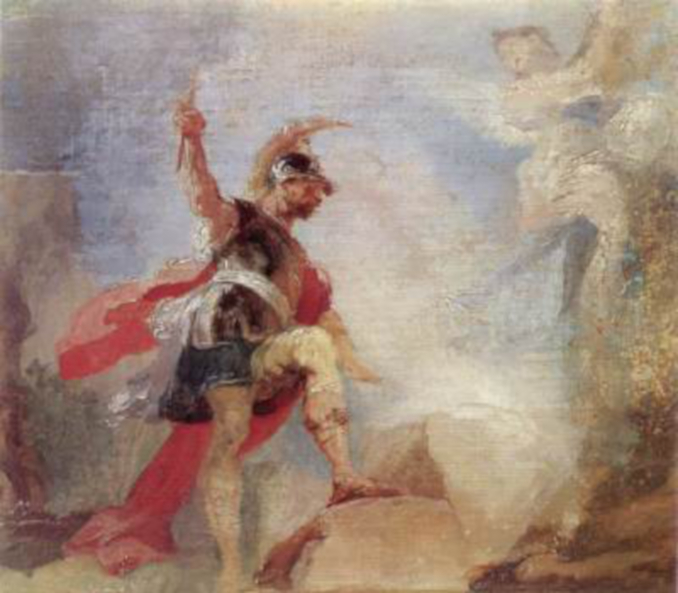 By Nina Heyn – Your Culture Scout

There is a longstanding intellectual debate about whether an individual can change history. Attila the Hun, Alexander the Great, and Adolf Hitler come to mind in support of this argument, with countless lives and the fate of entire nations changed by the acts of these conquerors. However, historical paintings—commissioned by royalty, churches, or city councils—more often focused on positive examples of individual heroes, drawing from biblical stories, mythology, or some glorious past event from history. One such inspiring hero is the Old Testament character of Gideon, a military leader whose bravery and compliance with the word of God has earned him an exalted place in both Judaism and Christianity. Gideon has been appearing in works of European art for centuries.

One of the most appealing life-size “portraits” of Gideon is featured on a panel from an altar painted in 1550 by the Dutch master Maerten van Heemskerck. The main part of the altar is lost, and the side panels are now divided between two museums in two countries. Nonetheless, the most striking image from the altar survives—this “action shot” of Gideon communicating with God. In this panel, we can see every perfect muscle on Gideon’s twisting body, and the hero’s clothing vibrates with colors of deep red and yellow ochre. Although Heemskerck was already an accomplished painter in his native Low Countries when he went on a four-year artistic pilgrimage through Italy, his exposure to Renaissance art caused his paintings to explode with vivid colors and his figures to gain life. The time he spent in Rome allowed him to study Michelangelo’s muscular nudes as well as the art of Raphael and Lippi, full of light and bright colors. And this is what Heemskerck paints so animatedly in this Gideon figure: a young, strong man with a perfect warrior’s body, reaching out toward his destiny.

The biblical story of Gideon and his army goes like this: A young Israelite is chosen by God to lead his tribe and other people of Israel to free them from oppression by hostile tribes and to bring an end to their idolatry of other gods. After receiving miraculous signs that the messages are indeed of divine nature, Gideon starts gathering fighters from his and other tribes. He is too successful, because as many as 32,000 men show up at his military camp. When God asks Gideon to send away everyone who is afraid of battle, 22,000 men end up leaving. However, the remaining 10,000 are still too many—this is to be a victory due to divine providence, not military superiority. Gideon then hears the voice of God again, telling him to observe his army drinking water at a source. Those who kneel and reach out to drink from their hands are to be put to one side, and those who lap water in a hurry like dogs are to be put on the other. At this point, God tells Gideon to send away all those who knelt to drink, leaving only the ones who remained standing or had a quick lap of water. This leaves Gideon with only 300 warriors, but God assures him that this small group will be enough. When Gideon’s chosen 300 attack the Midianite army of thousands, armed only with shofar trumpets and torches, his tiny army creates enough noise and light to put fear into the Midianites, who kill each other or flee and leave Gideon victorious. Gideon wins with a handful of men, using night-time confusion as a weapon.

This story can be found in the Hebrew Bible (Tanakh) and the Old Testament, and there is even a version of the drinking water test in the Koran. The message that it is the determination of the fighters rather than their number that counts almost echoes the true events of the Battle of Thermopylae, where 300 Spartans famously opposed the entire Persian army. Gideon’s faith in God’s will and his cunning psychological victory against a much larger enemy have become great moral and cultural metaphors in Judeo-Christian culture.

Probably the most well-known illustration of Gideon’s battle with the Midianites comes from an early painting by Nicolas Poussin, a French Academic-style artist who tried to have a career at the court of King Louis XIII, but who got tired of royal commissions and the politics that went with them. He was at his happiest living in Rome, painting religious and mythological scenes. The irony is that while Poussin’s prolific legacy was admired long after his passing by numerous French painters, from David to Cézanne, and his canvases can be found in major museums around the world, very few are housed in his beloved Rome. One of the Poussin paintings that is in Rome is the Battle of Gideon Against the Midianites. 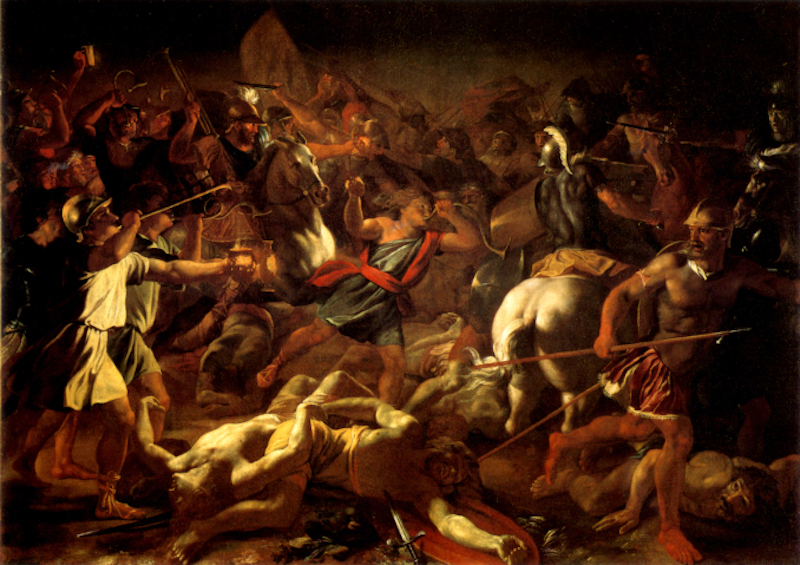 Gideon’s warriors can be easily recognized as those blowing into shofars and holding oil lamps, whereas the Midianite enemy is running away or already vanquished on the ground. Gideon is presumably the young man in the center—the trumpet-blowing, sword-wielding leader of his band of righteous men. Poussin was a master of composition, and his most famous paintings include complicated arrangements of people and objects and the symbolic relationships between them. The rump of the white horse, prominent in the composition, echoes a similar viewpoint of a horse in Caravaggio’s Conversion of St. Paul (the Balbi version), which is ironic since Poussin virulently criticized his predecessor. Clearly, this did not stop him from occasionally borrowing from his artistic antagonist.

In Battle of Gideon, bright splashes of light illuminate the bodies of horses and fighters. Men fall away from the central figure of Gideon as if he were in the midst of a gigantic flower with petals dropping to reveal the center. Gideon is a God-inspired leader who can wade unharmed into a melee of men, horses, and weapons, with all falling away in the path of his victorious progress. What better way to show an invincible leader than to place him in the thick of battle protected by his divine destiny? 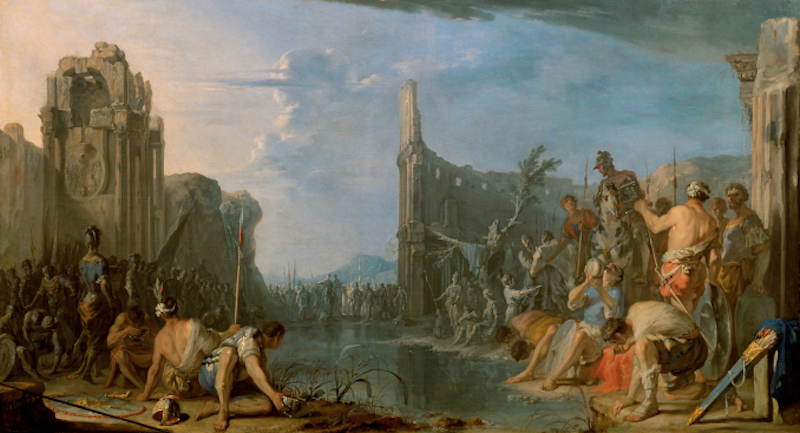 A minor German Baroque painter, Johann Heinrich Schönfeld, created an illustration of the “river test”—the decisive moment in the story of Gideon’s army. Even though the work was meant to be a glorification of the brave 300, the artist placed the erect figures of the noncompromising fighters far in the background—just some bluish silhouettes in the center of the composition. The foreground, in bright colors, is devoted to those who are much less ready to engage in battle. One man is sitting at the water’s edge pouring water over his face, while another is settled on the ground and chatting with his friends. Schönfeld seems to say that the lack of vigilance or focus on the military task at hand disqualifies these men from the battle. Even though the figures in the front are in vivid colors, the viewer’s eye is drawn to those who stand proudly in the center, resisting the temptation to kneel and take a drink.

A different 17th-century image of the same moment comes from Spanish tenebrist Pedro de Orrente, who almost exclusively painted religious themes. His own painting of Gideon’s Troops does not seem to have survived, but the Prado has a contemporary copy. Here, Gideon’s direct connection to God is very distinct—we can see him mounted on an exquisite white steed, piously clasping hands toward his divine interlocutor in the open heavens. Lest we forget that this biblical scene takes place in the “exotic” Middle East, some warriors are wearing colorful turbans, and there are camels in the background. The water is less carefully painted, but this may just be the copyist’s fault. 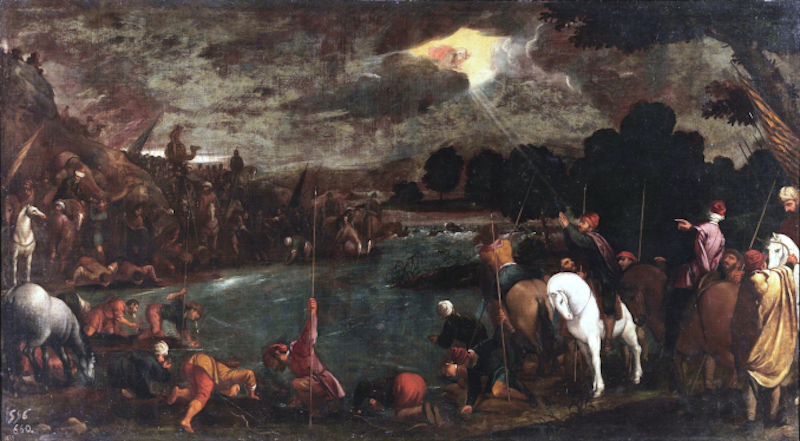 Finally, we can also find the same moment from Gideon’s tale in an early 20th-century book illustration. Here, Gideon is dressed as a Roman centurion (presumably to give him suitable heroic and military connotations), but the military tents resemble the Ottoman ones abandoned by Kara Mustafa after the Battle of Vienna in the 17th century. Historical accuracy does not matter much here. What is important is the contrast between the kneeling soldiers intent on getting their drink and those standing straight like the proud and fearless warriors that they are. These are the men that God and Gideon will choose to wage a justified battle. In Gideon’s world, less is more. 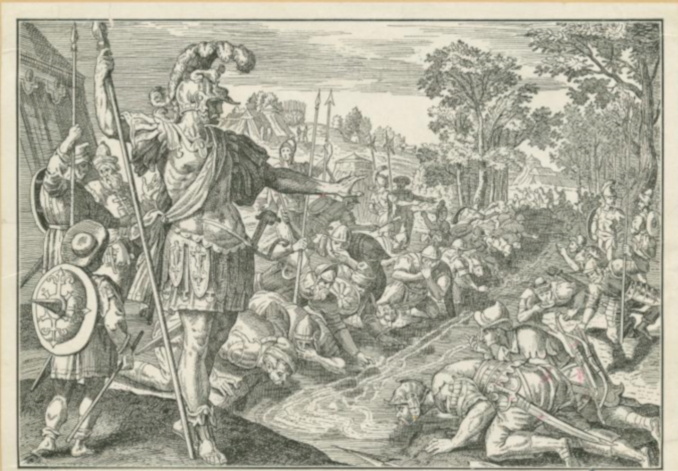 This is an enduring message. Sometimes, those who win are people with stronger convictions rather than those who are more numerous.